Drinking whiskey can be intimidating if you don’t know where to start. I’m writing this for anyone who wants to know a little more than nothing about the differences between whiskey, whisky, bourbon, rye, scotch, irish whiskey, etc.

I should also note that distilling and aging spirits is an immensely complicated process, and I will not be spending too much time on the details of the process because A) this is an overview for folks who are new to the topic and B) frankly, I don’t know all that many of the details.

Going forward I’ll be spelling it whiskey, because that’s the most widely used spelling here in America, but the whisky/whiskey spellings are originally due to differences between Scottish and Irish translations of the original root word. Those in Ireland insert an ‘e’ in whiskey, while the Scots leave it out (whisky).

A casual definition of whiskey is simply liquor distilled from a mash of grain, most commonly barley, rye, wheat, or corn although others are certainly used. Some countries have legal requirements that include a period of aging before the product can be labeled whiskey, but in the United States that is not the case. Whiskey is a big category so I’ve provided definitions for the most common types of whiskeys below. 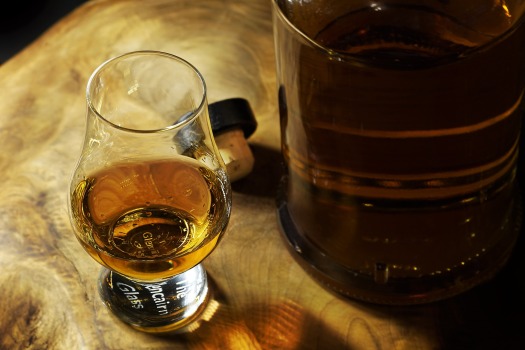 Bourbon – An american-made whiskey distilled from a mash of at least 51% corn and aged in new charred oak casks, with no legal age requirement, but the whiskey must age for 2 years minimum to be called “straight bourbon” though bourbon is often aged for longer. In addition, it must be put in the barrel at not more than 125 proof (62.5% alcohol) and it cannot contain additives or flavorings other than the flavors imparted by the particular mash used.

Rye Whiskey – a whiskey distilled from a mash of at least 51% rye, barreled at 125 proof or lower, and aged in new charred oak casks. Once again, “straight rye” is reserved for whiskey that has aged for at least two years, but once again there are plenty of products on the market that far exceed that age.

Scotch Whisky – made only in Scotland, scotch is distilled from a barley mash, though these days the mash may also contain some wheat or rye grains. The spirit is then aged for at least three years in an oak cask and must not include any additives or flavorings (notice the “new” requirement has disappeared). Because of the local materials used to make scotch, the area of Scotland a bottle comes from can have a significant impact on the taste, even if the process used is identical to a bottle from another region.

Irish Whiskey – Undergoing a process similar to that used to make scotch whiskey, the aptly named Irish whiskey comes from Ireland. Distilled from a mash of that must include barley but may include other cereal grains, irish whiskey must then be aged in wooden casks for three year and contain no additives or flavorings. Often Irish whiskeys like Tullamore Dew go through more than one distillation cycle, stripping out some of the heavier flavors and resulting in a lighter, smoother final product.

There you have it – a quick primer on the most common kinds of whiskey you’ll come across! Next post I’ll cover some of the lingo used to order whiskey. I’ll also recommend some of the best cocktails that will allow you to enjoy your whiskey without hiding it behind coca-cola and ice. Cheers!